Satan’s definition of sex is that it’s all about body parts and it’s all about consuming another person to satisfy myself. It breaks my heart how the Christian subculture has blindly accepted this definition when God has something so much deeper and truer for us.

In the comment section, some of what I wrote was met with confusion, which I hope to help clear up here. One commenter wrote:

As far as I am concerned, I plan on objectifying my wife until death do us part. And nobody on this blog or any other is going to make me feel one speck of guilt about it.

While not very helpful for interactive dialogue, it shows the anger and confusion some husbands feel about this subject. A more helpful question was posed by another commenter:

What is the difference between lusting after my wife and desiring her sexually or being turned on by her? Are all three the same? If I wasn’t turned on by her body, why would we have sex? What would cause me to become aroused and pursue sex with her?

These comments show the need to differentiate between objectification and attraction. Before I jump into that, I thought a comment from a wife on the same thread was incredibly helpful:

No woman, including your wife, is here on this earth to be an object to you. Many women tell me that their husbands use them for sex, and they know it. Their husbands aren’t emotionally invested in the relationship, don’t really care if their wife is interested in sex or not, apply pressure for sex, etc. This is using a woman for lust or objectification, rather than desiring her as a person. 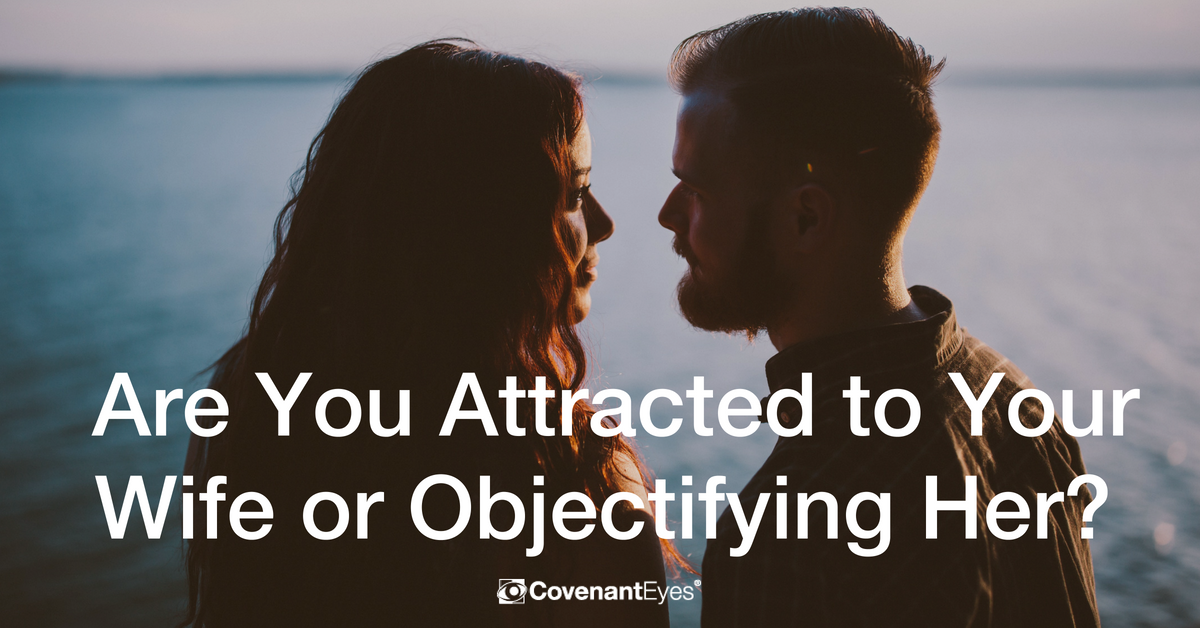 The Difference Between Lust and Attraction

There are really three terms at play here: lust, objectification, and attraction. The Greek word used for “lust” in Matthew 5:28–”But I tell you that anyone who looks at a woman lustfully has already committed adultery with her in his heart”–means to desire. It’s translated elsewhere in the New Testament as longing, desire, covet, and want in any number of contexts including desiring food, death, and the Kingdom of God itself. Jesus is saying that lust is when a man looks at a woman who is not his wife with the desire to be with her sexually.

Lust and attraction are two different things. Attraction is when you think someone is pretty. It does not mean you are picturing them sexually or seeing yourself being in a sexual situation with them. A lot of Christians beat themselves up because they think a man or woman is attractive, even though they are not desiring to have sex with them or thinking about them in a sexually explicit way.

Related: How to Explain Lust to Your Children

You can be sexually attracted to someone without lusting over them. You lust when you take your natural sexual attraction to the next level of consciously entertaining and holding onto that thought. Savoring it or playing it over and over again in your mind. Picturing yourself with that person sexually. This is different than noticing someone as being attractive.

Where Does Objectification Fit In

Now, objectification. Objectification is when we take a human being and treat them like they are an object. This can happen in a workplace when a boss or owner doesn’t treat his or her employees with respect as dignified human beings. If the employees are a means to an end and are treated as such, they are no longer being treated as humans.

Slavery is the utmost example of objectification, but anyone with a boss who only cared about what they produced has also been objectified.

Objectification can happen in sports when we only care about the score or statistics and shout demeaning insults at players when they mess up. Coaches can objectify their players, just as military officers can objectify the privates at the bottom of the chain of command.

The point is: nobody likes to be treated as subhuman and we all know it is wrong when it is happening to us.

How Objectification and Lust Relate

Objectification is when we turn a person into a collection of body parts, which are objects. Forgive me for the gross example, but if you removed your hand and set it next to you on your desk, that hand would be an object. It is not you.

People are not collections of body parts, they are people.

Think of it like a six-string guitar. For a guitar to create the music it was made for, it must have all six strings attached and working. If you took off five of the strings and only had one remaining, you can strum that one string over and over again, but you wouldn’t be playing the guitar. You’d be creating noise, but not music. This is what our culture has done with sex.

Imagine each string of the guitar represents one of the essential ingredients of a God-designed marriage. There are several categories we could use here, but let’s name our strings Trust, Commitment, Loyalty, Sex, Respect, and Humility. When you play all six strings, you get the sound of love, God-designed love, which is only found in marriage.

What our culture has done is removed the five strings of Trust, Commitment, Loyalty, Respect, and Humility and claims that love can be “made” with the playing of only one string, Sex.

Can a Husband Objectify His Wife?

So while a husband can’t technically lust over his wife, he certainly can objectify her. He objectifies her when he sees his marriage as a one-string marriage. When he thinks his wife’s purpose for existing is to have sex with him. He has made her subhuman and an object for him to consume, use, and then discard until the next use is needed.

This guitar metaphor is also quick to show that the Sex string is just as important in a marriage as anything else is. This is not a divisive either/or fight. You can’t make God-designed music on the guitar with only five strings either. Song of Solomon or Proverbs 5:18-19 all testify to this. It’s good and God-honoring for a man to be sexually attracted to his wife, and for a wife to be sexually attracted to her husband. But that desire is in the context of a six-stringed, one flesh marriage. When two have become one in every area, not just in one (sex).

So husbands, yes, you can enjoy your wife, including her body parts, so long as you remember you married your wife, not her body parts. Can you imagine the vows in that marriage ceremony!? I trust that no husband made marriage vows only to his wife’s body parts, therefore no wife should be seen as just body parts.

God designed you to be attracted to a woman, a her, not to body parts, a that.